He is Ear – Nose – Throat and Head and Neck Surgery Specialist. In 1974 he graduated from Ankara Ataturk High School. After he finished preparatory class in English for 1 year in ODTU, he won Hacettepe University Eskisehir Medical Faculty.

In 1980 he finished Hacettepe University Eskisehir Medial Faculty. In 1984 he got his career education in the department of ENT in Hacettepe University Medical Center. He served his military service in Ankara Mevki Hastanesi as an ENT Specialist, in 1986 he began his conscription in state of Ordu Government Hospital.

He worked in Izmir Atatürk Education and Research Hospital as chief intern in 1989, as a chef assistant in 1991, as an instructor in 1994 and worked there till June 2008. On June 20088, he worked in Namik Kemal University Medical Faculty in head of the department of ENT, Head of Department of Surgical Medical and worked as a Medical Faculty member of University Senate finally, he resigned on August in 2010.

He is experienced in Pediatric Ear – Nose – Throat illnesses diagnosis and treatment, ear disease micro surgery, attempt of endoscopic illnesses in sinus and nose, rhinoplasty operations and head and neck surgeries. In these regards, he has been actively involved in the theoretical and practical training of more than 40 ENT specialists. 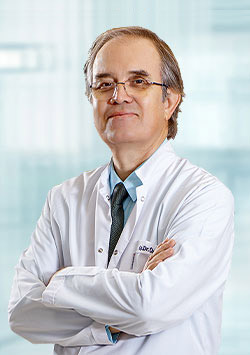